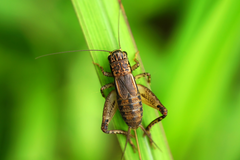 The one fact everyone knows about crickets is that they make a distinct chirping sound all throughout the summer. What people don’t know is that crickets have a lot of other interesting characteristics. For instance, their auditory organs are actually on their legs. Their hearing is so sensitive that they're nearly impossible to sneak up on. Crickets actually make their “chirping” sound by rubbing a serrated part of their legs together. They use this chirp for both mating and signaling changes in the weather around them.

One more thing you may not know about crickets (unless you found out the hard way) is that they’re rather obnoxious pests all over New York. Crickets in your building could soil fabrics, eat and ruin dry goods, and even keep you and your tenants up all night. Just like with other pests, the best way to crickets away from your business is to learn a thing or two about them. Here’s everything you should know about the crickets of New York and how to keep them from keeping you up:

Crickets are a member of the family Grylidae. There are over two thousand different species worldwide. They're most well known for the musical chirps the males create by rubbing their forewings together. Depending on the variety, they can measure all the way down to one tenth of an inch and all the way up to two or more inches in length. They have antennae, usually thin, and hind legs that are bent specially to make jumping easy. Most varieties of cricket have four wings: two stiff forewings, and two longer, thinner hind wigs.

What types of crickets are common in New York?

How can I prevent crickets?

There are a number of things you can do to better exclude crickets from your property. Some of our most effective tips include:

Our final, and arguably the most important tip: contact a professional commercial pest management company as soon as you suspect an infestation. They'll know exactly what to do to help remove existing pests and prevent future ones. If you have any additional cricket-centric questions, give us a call. We've got the answers you're looking for.