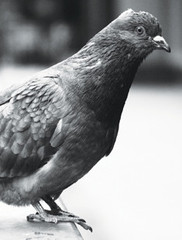 According to the New Jersey Chapter of the National Wildlife Control Associates, pigeons, starlings and house sparrows are New Jersey's primary bird pests. They cause millions of dollars in building damage each year due to nesting habits, acidic droppings and generally destructive behavior. If an infestation isn’t quickly eliminated, these birds can infect people, livestock and pets with parasites like fleas, lice or ticks and diseases such as salmonella, aspergillosis and trichomoniasis gallinae. All three of these diseases are typically transmitted between birds at bird feeders or baths, where overcrowding occurs.

New Jersey facility owners will recognize the European starling by its small size and the purple and green iridescent tinting of its black feathers. Some starlings may have cream-tipped feathers that create a "flecking" effect. Over winter, the cream-tipped feathers fade to expose a rich, purple glossiness on the throat, cheeks and nape of male starlings. The rump and flanks of breeding male starlings develop a deep, shiny green hue as well.

The NWCA states that starlings transmit diseases via droppings. Salmonella, blastomycosis (a fungal infection producing flu-like symptoms) and histoplasmosis are the most common diseases resulting from a starling infestation.

Starlings are adaptable and opportunistic, so they thrive in both rural New Jersey and metropolitan areas. They prefer to eat insects and grubs but have no qualms about foraging through trash cans, dumpsters and picnic sites.

Starling droppings can severely degrade a steel building’s components and cause substantial structural damage. If a starling infestation is not removed in a timely manner, the corrosive droppings will not only dissolve building material but they will encourage fungal growth in the soil, leading to diseased grass, trees and landscape plants.

House sparrows live in all U.S. states and are especially ubiquitous along the Eastern Coast. They have an extraordinary ability to adapt to urban areas by eating human food scraps and nesting in all kinds of structures, despite the harsh winters.

Male sparrows have brown napes, black throats and tan cheeks, while female sparrows are mostly brown with a unique eye-stripe that differentiates them from the opposite gender. Both are small, noisy, and often fearless birds that have voracious appetites for just about anything edible.

Food processing and manufacturing facilities suffer the most damage from sparrow infestations. Drainage pipes, gutters and machinery blocked with sparrow nests can malfunction, start electric fires or cause water damage. Rich in uric acid and bacteria, sparrow droppings are just as corrosive as starling feces and will rapidly degrade building materials unless removed in a timely manner.

"City doves" or "street pigeons" may be the worst of the worst when it comes to New Jersey bird pests. This is because of the colossal amount of excrement each bird produces annually--nearly two and a half pounds! Combine pigeon fleas, pigeon parasites and diseased pigeon feces (salmonella, meningitis, tuberculosis and encephalitis have all been found in pigeon excrement) with an infestation and you've got an extremely bad, possibly disastrous situation, especially if infected pigeon droppings are carried into restaurants, hospitals or food processing facilities by people’s shoes.

Don't risk attacking a bird infestation using non-professional methods by yourself. You could get hurt by aggressive birds or contract a disease through exposure to feces. Instead, call Assured Environments today, to prevent New Jersey bird pests from causing extensive damage to your facility.