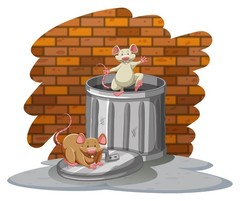 According to NYC's Health Department, the Big Apple's current rat problem is a "human problem" exacerbated by shortcomings in regards to maintaining an uncluttered and clean living environment that can make pest management more difficult to maintain.

Unfortunately, rats aren't the only rodents enjoying the spoils of NYC. Facility managers responsible for the upkeep of restaurants, schools, hospitals, shopping malls, hotels and the like have to contend with rodent infestations involving mice that are also native to the NYC/New Jersey area.

Interior infestations of deer mice are mostly found in undisturbed places, like attics, basements and warehouses. Deer mice are not only destructive but also threaten human health because they harbor the pathogen responsible for transmitting hantavirus pulmonary syndrome, a potentially fatal respiratory disease spread through infected deer mice urine and mice carcasses.

If you see mice scurrying around your facility, chances are they are house mice. Able to adapt quickly to extreme environments and known for their prolific breeding habits, house mice can scale walls and leap from one surface to another better than Spiderman. They love secluded, dimly lit areas and eat just about anything. In addition to carrying ticks, mites and fleas into a facility, house mice excrete urine that can induce allergy symptoms in children and older people.

NYC rats are Norway rats, probably the most destructive and tenacious of all rat species and responsible for a majority of the rat problems in the vicinity. Capable of gnawing through lead and PVC pipes, Norway rats may be large but can squeeze their chunky bodies through holes no more than one inch wide. Vectors of salmonellosis, jaundice, trichinosis and a host of other serious diseases, Norway rats present a very real danger to human health.

Just like their name suggests, roof rats prefer infesting a buliding's upper tiers. They forage in groups and will faithfully return to viable food sources. Roof rats are infamous for killing half the population of Europe in the 14th century by spreading the bubonic plague. They are also known to transmit typhus, rat-bite fever and salmonellosis to humans and animals.

Stop rodent infestations before they inflict damage on your facility and its occupants. Call the pest control experts at Assured Environments today and enjoy a rodent-free building tomorrow!