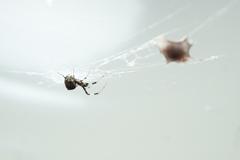 Spiders. Arachnids. Eight-legged terrors. Horror movie antagonist and childhood nightmare. There are over 45,000 different known species of the eight-legged arthropod known as the “spider” crawling around out there. We know as well as you do that you don't want any of them infesting your business or commercial property.

Today we’re going to walk you through everything you could possibly want to know about spiders. We’ll start with an overview of their main characteristics and the most common pest species. Then, we’ll dive deep into the best ways to make sure they never bother your business. Let’s get started.
‌

The defining difference between arachnids (including spiders) and insects are their respective number of body segments. Arachnids have two main body segments, whereas insects have three. Arachnids have a cephalothorax and an abdomen. The cephalothorax is the part of the spider’s body containing its eyes, mouthparts, and legs. The spider’s abdomen contains everything else. Insects, meanwhile, have a distinct head, thorax, and abdomen.

There’s one more big difference between spiders and insects, and it’s the obvious (or at least infamous) one. Insects have three pairs of legs, while arachnids have four, giving them eight legs total. In addition to their legs, spiders have several other defining physical characteristics. All spiders have eight eyes, though different species have different eye arrangements. Almost all spiders have fangs, or “chelicerae.” Finally, all spiders possess spinnerets. Spinnerets are glands that create a spider's web-making silk. To summarize, spiders are defined by their three body segments, eight legs, eight eyes, chelicerae, and spinnerets.
‌

Spiders use their spinneret silk to create their distinctive “cobwebs,” which they use to catch prey. After they capture their prey, spiders usually inject it with venom before consuming it. Some spiders may also wrap their capturing prey in the webbing to store it for later. Spiders also live, mate, and rear their offspring on their cobwebs.

Most spider webs look similar, but different species build their webs in different ways. Orb weaver spiders, for instance, create large vertical orb-shaped webs to capture insects. Other hunting spiders, such as wolf spiders, don’t build cobwebs at all. Not all spiders build cobwebs, but all spiders have spinneret glands.
‌

Are there dangerous spiders in New York?

There are two spiders that pose a legitimate threat to people’s health in New York. They are the black widow spider (Latrodectus spp.) and the brown recluse spider (Loxosceles spp.). Here’s what you should know about each of them:

Black widows are a shiny black color with a distinctly round abdomen and a red hourglass shape on their back. They're most common during warmer months. Black widows are particularly dangerous because their venom is highly potent.

If you're bitten by a black widow, immediately contact medical professionals. Widow bites may trigger fever, nausea, and high blood pressure. These symptoms may trigger even more significant problems for those with compromised immune systems.

The brown recluse is a uniform tan brown color with a distinctive darker brown violin-shaped marking on its back. Like black widows, they possess a highly-potent venom, and they may inject it when biting people in self-defense.

Usually, Brown recluse bites cause pain, restlessness, and fever, but they may result in large and painful wounds. Like black widow venom, brown recluse venom is quite dangerous to people with compromised immune systems. Brown recluses are naturally shy and bite people quite rarely. Other spiders are often confused with Brown recluse spiders.
‌

There are a number of things you can do to safely exclude spiders from your business or commercial property. Here are a few of our best tips:

Inspect the exterior of your building for cracks and holes regularly. As soon as you see any, you need to repair or fill them in. Make sure windows and doors fit into their frames as tightly as possible. Check for cracks and gaps around your door and window frames especially carefully.

Remove webs as soon as you see them

Building webs is hard work. Destroying that hard work frequently is a great way to discourage spiders from building near you. If you can find and remove webs frequently enough, spiders will find a place where you won’t disrupt them instead.

Spiders, just like most other pests, love to hide in mess and clutter. Don't give them places to hide by being on top of regular cleaning and clutter management.

Our final tip is to contact a professional commercial pest management company as soon as you suspect an infestation. A team like the one at Assured Environments will know exactly what to do. Not only can we remove existing infestations, but we’ll prevent future infestations as well. If you need any spider questions answered, give us a call today.