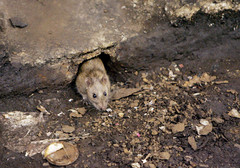 If the past few years have taught us anything, it’s that our well-being is intimately linked to the health of animals.

The current Ebola epidemic probably got its start when someone came into contact with an infected animal, perhaps a monkey or a fruit bat. The virus causing Middle East respiratory syndrome appears to spread from camels to humans.

Yet animal pathogens remain a scientific terra incognita. Researchers have begun cornering animals in far-flung parts of the world to learn more about what infects them.

Recently, a team of pathogen hunters at Columbia University went on an expedition closer to home. They conducted a survey of the viruses and bacteria in Manhattan’s rats, the first attempt to use DNA to catalog pathogens in any animal species in New York City.

“Everybody’s looking all over the world, in all sorts of exotic places, including us,” said Ian Lipkin, a professor of neurology and pathology at Columbia. “But nobody’s looking right under our noses.”