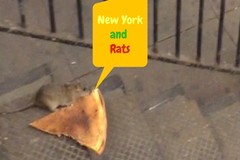 Thanksgiving is coming up, which means a lot of New Yorkers will be either traveling out-of-state or having out-of-state relatives over. As you’ve no doubt noticed, out-of-staters are fascinated by everything NYC. No doubt you’re used to having the same conversations and answering the same questions every year.  There are the inquiries about the pizza, about the celebrities, about the subways, and then, inevitably - about the rats.

Assured Environments never gets tired of setting the record straight about New York’s rat problem, but--you know--it’s our job. We put together this list of the most commonly asked questions about New York rats and their answers to prep you for at least one aspect of your next awkward family dinner.

Are there really as many rats in NYC as people?

This is the biggest and most enduring of New York’s rat-based urban legends. Sometimes you’ll even hear there are up to five times as many rats as people in NYC. According to the latest population estimate, there are 8,550,405 people living in NYC. 8,550,405 times five is 42,752,025. So if that estimate were correct, there would be 42 million rats living in NYC.

Luckily, this isn’t nearly the case.

According to a 2014 study, the NYC rat population is closer to 2 million, or one rat for every four and a half people living in NYC. Still a lot, but not quite as many as people usually think.

Do NYC Rats Really Not Fear People At All?

In 2013, then-Manhattan Borough president Scott Stringer famously quipped, “The rats don’t scurry. They walk right up to you and say, ‘How are you, Mr. Borough President?’” Your relatives may have also seen that admittedly disturbing viral video of the rat crawling on a sleeping man on the subway. For whatever reason, a lot of people seem to think that rats have been become so accustomed to living amongst people in NYC that their natural, shy behavior has been bred out of them.

In fact, the opposite is true. Rats are still so prevalent in high-population centers because they’ve adapted to avoiding humans very effectively. Think about it: we are by far the most dangerous predator they encounter, especially when  living in big cities. If rats weren’t afraid to stroll right up to people, they wouldn’t be the problem they are right now.

This is another question sustained by overblown urban legends and stories. Like reports of rats’ fearlessness, stories of rat attacks are less striking when contextualized. There are undoubtedly rat attacks in NYC: according to Health Department statistics collected in 2010, approximately 100 New Yorkers are bitten by rats every year.

However, NYC rats don’t attack humans without cause. The reason why rat bites happen more often in NYC is because rats and humans live in closer proximity here than in many other parts of the world. Like most other animals, rats will react aggressively when they feel threatened and have no means to escape. If you corner a rat or get between it and food or it’s nest, it might lash out. Rat bites are undoubtedly a problem in NYC, but they aren’t evidence of some secret rat anti-human militia.

Are There Really Rats The Size Of Cats In NYC?

New York rats can get pretty big; they have access to a lot of food, and it’s usually really close to their homes. However, that doesn’t mean there are any R.O.U.S.es’ sneaking around. The biggest rats in New York get to be about 2 pounds. “I do not think there are any 3 pound rats in the city,” doctoral student Matthew Combs told the Huffington Post, following a study in which he and colleagues collected 100s of rats. The average adult rat in New York weighs about half a pound, according to Combs’ study.

It’s also worth noting that bigger rats are not inherently more dangerous or diseased than smaller rats. It just means they’ve had a little too much pizza. Honestly, though… who hasn’t?

There’s Just Nothing You Can Do About Those Darn Rats, Is There?

Not even a little bit true.

New York has some of the oldest, best commercial pest control in the world. New York is the birthplace of integrated pest control; which uses science, technology, and sustainable practices to learn about pests like rats and manage them with unprecedented efficiency.

If you ever have a pest control problem, you can call Assured Environments 24/7 and they’ll put together a comprehensive approach customized to your specific needs to not only eliminate the problem, but make sure it never happens again. That way you can get back to more important New York City hobbies, like eating pizza.