Home Page > Blog > Why Are There Stink Bugs in New York? 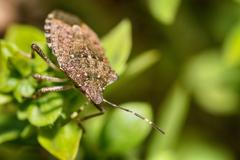 Stink bugs aren’t as well-known as a New York pest as rodents or roaches—they’ve managed to slip under the radar. Make no mistake, however, stink bugs are here… and once you smell them, you’ll be hard-pressed to get rid of these pesky pests.

Seeing a stink bug can be unnerving. However, understanding more about these critters will help lessen the fear. Here’s everything you need to know about stink bugs in New York

Where Do Stink Bugs Come From?

Stink bugs spend most of their time sheltering in trees, under rocks, or in warm, shaded areas. When temperatures start to drop, stink bugs look for places to hibernate. If you see a mass of stink bugs outside your property, it’s because they want in! Unfortunately, stink bugs are active for most of the year. However, you’ll probably only notice them starting in early to mid fall.

Stink bugs congregate close together around buildings in order to maximize their time in the warmth of the sun, to keep each other warm, or to search for ways they can get inside. Should they succeed, very large quantities of stink bugs could infest your property. They’ll find hiding places and sleep eventually, but until then they’ll be around… stinking up the place.

What Do Stink Bugs Want?

Stink bugs are usually just looking for a place to crash. They hibernate over the winter but they can’t do that unless they’re warm and safe. Stink bugs don’t mate or lay eggs inside, they don’t eat any indoor food, plants or other products, and they don’t do any structural damage. They even leave your home to eat and mate during spring!

No. Stink bugs are not dangerous. They don’t attack humans, they don’t cause substantial structural damage to buildings, and they don’t spread disease. Large concentrations could exacerbate airborne allergies. However, for the most part, stink bugs are totally harmless. These pesky pests are just quite smelly from the distinctive scent of secretions they release from the specialized glands in their abdomens when threatened or crushed.

How Can I Keep Stink Bugs Out?

Stink bugs usually congregate around the southern or western sides of buildings so they can stay in the sun as long as possible. To keep stink bugs out this fall:

Sure, stink bugs are far from the most troubling pest… but it’s still best to get and keep them out. If you need help with either, give Assured a call. Our technicians are experts with any pest problem. With a little help from your friendly neighborhood pest control team, you can head into fall smelling like roses!