Home Page > Blog > Why Canines Can Detect What You Can’t: Using Canines For Bed Bug Treatment 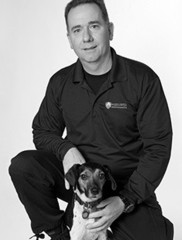 Dogs' noses have evolved to sniff out the most indiscernible smells and obtain amazingly accurate information from them. It's a scientific fact that dogs were born to sniff.

But how do they do it?

Human and canine noses share one similarity -- scroll-shaped plates made of bone-like tissue called turbinates, located in the nasal passages. Air passing over these turbinates is absorbed by scent cells embedded in dense, spongy membranes. Scent cell nerves send information about smells to the olfactory lobe of the brain, where this information is interpreted and "understood" by the cortex. However, this is where our "nose" affinity with dogs comes to a stop. While human turbinates are one square inch in size, canine turbinates unfold to 60 square inches--about the size of a piece of printing paper! In addition, the canine brain has developed a specialized "scent identifying" area of the olfactory lobe that is nearly 45 times larger than human olfactory lobes.

Sniffing Out Bed Bugs is Second Nature to Dogs

Bed bug detecting dogs have been scientifically proven to be a reliable method for exposing well-hidden infestations of bed bugs. In a report by the University of Kentucky Department of Entomology, researchers found that “the reliability of the trained, bed bug detection dog is impressive."  Furthermore, these amazing dogs are capable of finding bed bugs in concealed locations that humans cannot, such as tiny crevices in furniture and inside miniscule wall cracks.

Humans may be able to detect an unpleasant, musty cilantro or cabbage-like odor when a bed bug infestation is extremely bad, but trained dogs can immediately detect the presence of just a couple bed bugs. This is due to alarm pheromones, a chemical secreted through bed bug skin that smells powerfully distinct to dogs.

If You Have Just One Bed Bug, Our Dog Will Find It

Assured Environments routinely uses teams of highly trained bed bug detection dogs and professional handlers to track down bed bugs in all kinds of environments and situations. We have 100 percent confidence that our dogs will sniff out these pests,  so that you can get rid of a bed bug population before it develops into a full-blown infestation.