What do boxelder bugs eat? They primarily feed on the seeds of boxelder trees, though they can also suck the sap out of the trees’ leaves and twigs. Boxelder trees are easy to identify, they have the “helicopter” seed pods that spin and flutter as they drop to the ground.

Though they prefer boxelder trees, boxelder bugs can also feed on the seeds of other trees in the acer family, including maple and ash trees. Because they primarily eat seeds, boxelder bugs don’t inflict significant damage on the trees they infest.

Boxelders mate in early summer and lay eggs on seed-bearing boxelder trees in July. Eggs typically hatch within 10 to 14 days. Boxelder nymphs remain close to host trees and feed continuously through summer, gradually maturing into adults by fall. The warmer it is outside; the faster boxelder nymphs grow.

When fully grown, boxelders seek out warm, sunny places to congregate. Boxelder adults spend to spend winters dormant inside warm, sheltered areas. In the wild this may mean a hollow log or brush pile, but it could very well be your home. Around April or May of the following year, boxelders will come out of dormancy, leave their shelters, and seek out mates. 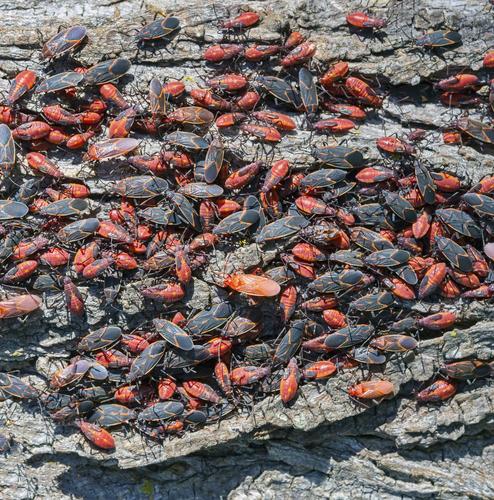 Boxelders bug infestations typically occur in most buildings in the fall, when they’re looking for a place to survive the winter. Depending on the ease of access, you may notice up to hundreds of boxelders in or near your building. Look for swarms of boxelders around windows, particularly windows with western or southern exposure.

Boxelders produce liquid feces, which may stain carpet, rugs, or other fabrics. These stains are small and appear faded yellow, brown, or grey in color. Boxelders may also stain nearby surfaces when crushed. Stains are most noticeable near areas where they congregate like windowsills and door frames.

Boxelders enter structures through cracks and crevices, usually around door and window frames or utility lines. Sealing these gaps with caulk or steel wool is the best way to prevent these and other pests from getting in. Look for gaps around areas outside the building where you see multiple boxelders, such as screen doors.

The easiest way to get rid of boxelder bugs is to vacuum up swarms as you see them. Using this method, you avoid crushing them and releasing their toxic liquid. Discard the vacuum bag when you're finished.

Wash off the areas where boxelders congregated with soap or bleach and water. Clear away as much outdoor clutter as you can, and trim nearby plants to deprive boxelders of attractive hiding places. If your boxelder problem isn’t going away, get in touch with the pros for boxelder bug control in New York, New Jersey, and Connecticut for stress-free pest management.

Though fully-grown boxelder bugs can fly, they usually crawl from place to place.

Why are there boxelder bugs in my windowsill?

In the fall, it’s common to find large ‘swarms’ of boxelder bugs bunched up on a window or sunny surface. These swarms group together to keep warm, especially in south and west facing windows.

Although boxelder feeding doesn’t permanently damage trees, if enough boxelders feed on a host tree, they may distort its foliage by depriving it of essential plant fluids. Severely infested foliage may take on a yellow hew or shriveled appearance.

While boxelders won’t hurt you, their toxic spray can stain and leave behind and unpleasant smell. They can also become obnoxious in large swarms.

It’s rare that a boxelder bug would bite you and only if it felt threatened. Bites are small, like a mosquito’s and do not carry any risk of disease.

How long do boxelder bugs live?

They can live about one year in the proper conditions. They will go dormant during cold winter months.

How do you get rid of boxelder bugs?

‌If patching holes and vacuuming doesn’t stop the influx of boxelders into your home, it’s time to call the pros. Assured Environments can help you eliminate these pests for good.