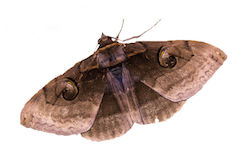 Moth Pest Control - How to Get Rid of Moths

Signs of a Moth Infestation

Indian meal moths infest pantries, cupboards, and other places where they can get food. They also prefer dark and damp places. Look for small rips or tears in cereal or pasta boxes, small holes in grain products, or droppings in pantries.

Fabric moths infest closets and clothing drawers, where their larvae can eat fabric in the dark. Look for small, telltale bite holes, tearing, or other damage on hanging or folded clothing. Larvae may still be on the clothing.

To prevent meal moths, you should store all dry goods such as cereal, pasta, bread, and sweets in sealed, hard plastic containers. Clean your food storage areas consistently and thoroughly to prevent crumb accumulation.

To prevent fabric moths, you have to keep them away from fabric! Keep clothing and other fabric-based material in plastic covers or sealable hard plastic containers. Make sure the rooms you store fabric in are dry and dehumidified.

Most adult moth species don't actually eat at all. Instead, they only live long enough to mate. Moths do still seek out food sources, however, because they lay their eggs onto these food sources directly.

Moth larvae or caterpillars actually do all the eating (and damage) associated with moths. They burrow into and eat through their food sources continuously, leaving behind waste and shed skin in the process.

Moths reproduce sexually and can lay hundreds of eggs in their lifetimes. Rate of moth development depends on temperature and food availability of the environment where the moths live. In warm climates, moth eggs hatch in four to ten days.

Female adult fabric moths lay an average of 40 to 50 eggs on promising food sources and die shortly thereafter. The time it takes to hatch is based on the temperature of their environment. In warm environments, the eggs could hatch 4 to 10 days.

After hatching, larvae begin feeding and growing immediately. As larvae grow, they will molt continuously up to 45 times. Depending on temperature and food availability, moths could remain larvae for only 35 days or up to 2 and a half years. After they’ve finally eaten and grown enough, larvae pupate inside silk cocoons. Pupation takes between 1 and 4 weeks newly emerged adult moths are ready to mate immediately.