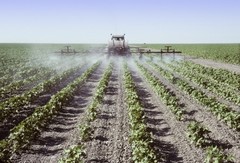 Pesticides are classified according to the kind of pests they target. In addition, they are formulated to attack specific physiological (or botanical) processes that kill the organism as rapidly and effectively as possible.

Pesticides can be a very helpful part of any commercial pest control program. That said, there are a lot of interesting things to learn about pesticides that you may not already know, including:

2. Baking soda and canola oil are in biopesticide

Baking soda and canola oil are included in making a biopesticide, a type of pesticide derived from certain plants, animals, minerals or bacteria.

3. Molluscicides contain desiccants that extract moisture from living tissue of slugs and snails

Pesticides intended to kill slugs and snails only are called molluscicides and contain desiccants that extract moisture from the living tissue of water-dependent animals.

Ovicides are unique pesticides that kill the eggs laid by mites and insects.

Insect growth regulators are a type of pesticide that disrupts life stages from pupa to adult so that the insect is unable to mature normally.

6. Hydramethylnon is an effective, slow-acting pesticide used to inhibit cell metabolism of ants and termites

Using a delayed toxin like hydramethylnon is necessary to control social insects because they will return to the nest eventually and poison other members of the colony.

7. There are currently 300 products belonging to seven chemical classes that are registered for use in bed bug control

According to the EPA, there are currently 300 products belonging to seven chemical classes that are registered for use in bed bug control. Pyrethroids and pyrethrins are the most commonly used insecticides for bed bug control and eradication.

8. All 50 states mandate experience and training requirements before an individual is qualified to apply pesticides.

In New York state, certified pest technicians must have at least 40 hours of field experience under the supervision of a qualified pesticide applicator before they can legally use controlled pesticides.

9. Larvicides and adulticides are used to control mosquito larvae and adult mosquitoes

10. The most commonly used insecticide is malathion

The most commonly used insecticide is malathion, an organophosphate pesticide frequently included in state and federal mosquito control programs.

For more information about pesticides, pest infestation, or integrated pest management, contact Assured Environments. One of our professional pest technicians will be ready to help you with any of your pest control needs!