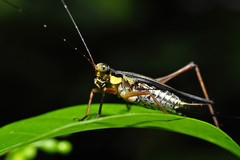 No matter where you’re from, you’ve no doubt grown accustomed to the telltale chirp of the crickets on hot summer nights. Crickets are so prevalent, in fact, that for many of us, they’ve become background music—an afterthought, almost. However, if we all knew more about these critters, we might not let them blend into the background because crickets are delightfully weird.

Bugs are bugs, we get it. However, if you look a little closer you’ll see that the common cricket is actually one of the most fascinating, strange, and even important insects in the world today.

Crickets are insects in the order Orthoptera. They are distantly related to grasshoppers. Crickets have cylindrical bodies, round heads, and a long antennae.

Crickets are not dangerous. However, they can bite. But it is rare for a cricket’s mouthparts to actually puncture the skin. The biggest threat these pests carry is being noisy when you’re trying to sleep.

Here are some of the craziest facts about crickets. You’ll never hear that chirp the same way again!

1. Crickets are a delicacy

In many parts of the world, crickets are considered a delicacy. They’re prepared in many different ways! In Thailand, fried crickets are commonly served with beer; one of the most popular snacks in the country is Jing Leed, a deep-fried cricket seasoned with sauce and pepper.

Almost all types of crickets weigh between .2 and .8 grams—or .0007 to .003 ounces. To put these numbers in perspective, a paper clip weighs one gram!

3. Crickets are a symbol of good luck

In China, crickets are a traditional symbol of good luck. In the imperial era, crickets were a popular pet for nobles and commoners alike. They were often kept in bamboo or even golden cages.

Like many other insects, crickets don’t have lungs and can’t breathe through their mouths or nostrils. Instead, they take air in through a series of small holes on the sides of their bodies called spiracles.

5. Every species of cricket has a unique chirp

There are over 900 species of crickets in the world. Every single one of these species has their own unique chirp! Speaking of the chirping noise…

6. Crickets chirp by rubbing their wings together

Each cricket wing has a set of 50-300 “teeth” arranged in a comb-like pattern. The cricket rubs this comb against the upper hind edge of its other wing. As their wing brushes the teeth, it makes the chirping noise!

7. Cricket’s “ears” are located on their legs

Crickets can hear each other’s chirps through a special auditory organ located on their forelegs.

In fact, you can apparently figure out the temperature outside by listening to cricket chirps:

Count the number of times a cricket chirps in one minute, divide that number by 4, and then add 40. The result is how hot it is outside!

9. Cricket fighting has been a popular pastime in China for over a thousand years.

Though its popularity has waned somewhat in recent years, the breeding and selling of fighting crickets is still a lucrative industry. There’s even an annual National Cricket Fighting Championship, which follows rules established in the 13th century and attracts fans from all over China. And don’t worry—crickets rarely harm each other when fighting; matches are decided when one cricket stops fighting and attempts to flee. It’s not uncommon for crickets of impressive pedigree and talent to be worth as much as 10,000 yuan, or $1,600!

Some people believe crickets will be the best way to feed our growing population in the future.

Pretty cool, right? However, all of these fun facts probably won’t help you if you can’t sleep or work because of the incessant, unbelievably loud chirping of crickets in your home or business. If you’re dealing with a cricket problem, get in touch with Assured Environments right away! Rest assured we’ll drive those noisy tenants out fast so you can enjoy the silence.