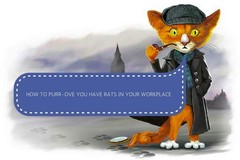 You have your suspicions. You’ve been lying low, biding your time, gathering evidence, taking notes. Maybe you thought you heard the quietest scratching noise when you were working late alone in the office. Maybe you thought you saw something small and dark dart behind the fridge from the corner of your eye. Maybe you put down your delicious poppyseed muffin for, like, a second, and then when you came back only some meager crumbs remained (actually, that one might have been Jeff).

The point is, it can be hard to know whether you really have a rat infestation, or if you’ve just finally lost it.

Once you eliminate the impossible, whatever remains, no matter how improbable, could be the truth. In this case, the truth could be rats. Here are five signs that there might be something to your vast, rat-based conspiracy theory.

You probably knew this was coming, so we’ll get it out of the way: rats poop. A single, fully grown rat can produce up to 40 droppings in a single night. These droppings are brown, dark brown, or black, about 9 to 14 mm long, and have a tapered, spindle shape. They’ll usually sort of resemble a large grain of brown rice.

Rats usually leave their droppings near their nests or where they feed. Look for them in drawers, cupboards, cabinets, inside boxes (especially cardboard boxes) and containers, or under furniture. If you happen to find any of these droppings, make sure you don’t touch them without gloves and a breathing mask. Don’t sweep up or vacuum the droppings, either. Check the area around where you found the droppings for other signs: chances are your shy little friends aren’t too far. You’re getting warmer. 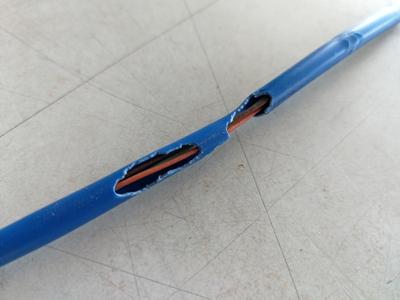 You probably wouldn’t notice this if you weren’t looking for it, but rat’s teeth never stop growing. They need to constantly chew whatever they can get their little furry gobs on to keep their teeth trimmed and sate their unholy appetites.

Little do the rats know, their little habit will prove to be their undoing! Look for exposed wiring or damage in power cables. Rats love chewing on the relatively soft plastic covering. Cardboard is another one of their favorite teething toys; check for tiny punctures and bite marks on the underside or along the corners of boxes.

While those are two big ones, keep in mind that virtually nothing is safe from their unending gnashing. Check food bags and boxes, cloth and fabrics, door casings, plastic protectors, pipes--even floorboards and walls.

A large enough rat problem can actually become a very real danger: when too many rats are chewing away at too many things, they’re capable of

eating away too much of an electrical cable and starting fires. Hey, if your rats were rallying to start a fire, that means when you bring them to justice you’ll be saving the whole office from certain death!

Turns out, rats are dirty. Go figure. They also can’t see very well. Together, these two attributes make up another weakness for you to exploit Rats tend to stick to established routes to and from their business in your office so they don’t wind up running into anyone or anything before they’re able to see it. They use familiar objects and surfaces to steer them where they want to go, but in the process they leave a bit of themselves behind: filth.

Look for smears or streaks of dirt, oil, grease, or other unpleasant bodily materials in tight spaces, at the corners of walls and floors, or in cupboards and drawers. If these rat highways are in underused or hidden-away areas of the office, be sure to look for footprints in dust or other signs that rats have passed through recently, such as gnaw marks or droppings. Keep a close eye on these rodent passageways, and you’re bound to run into one of your elusive foes sooner or later. You may even be able to follow this trail all the way back to their foul nest…

Rats are apparently not content to live openly in the nice, warm building you have so graciously (and unwittingly) provided for them. No, they need an additional place all their own. Rats tend to build their nests in secluded, dark locations, where they won’t be accidentally happened upon. 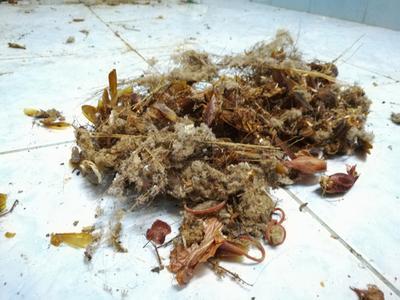 Basically, what you’re looking for are little dirty clumps of garbage crammed into the backs of cupboards or under appliances. Look for insulation, car

dboard, newspaper, shredded cloth or fabric and pretty much anything else rats can get their grubby little mitts on. These nests won’t always be easy to find; you might have to move furniture or get deep into cupboards or cabinets. If anyone asks, just tell them you lost a contact.

Any parts of your workplace that are connected to the outdoors by way of a garage, warehouse or storeroom are especially

prime real estate for rat nests. Being the lazy freeloaders they are, rats also love building nests near sources of food. It’s the rat equivalent of renting an apartment above a pizza place. Watch for areas where food would be accessible to rats and search those places especially carefully. Once you’ve found a nest, they’ll have to believe you. Right?

Sometimes, proving to your co-workers that you’ve got rats in the office can feel like trying to prove that extraterrestrial life exists. What they don’t know is, you’re not alone in your quest. Mulder had Scully to help him as he pursued The X-Files, and you’ve got us at Assured Environments. We may not be a doctor-scientist-FBI agent superhuman, but we know rats.

When you have the evidence you need, we’ll be waiting in the wings to finish the fight you started. Just contact us and give the operator the codeword (the codeword is a description of your workplace, your problem, and a time that would work well for you to meet with a pest control technician). Then, a professional will be on their way ASAP to prove you right!