Home Page > Blog > How Do Spiders Choose Where to Spin Webs? 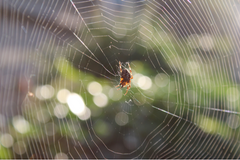 Where a spider builds its web depends on what type of spider it is. Different families of spiders have unique abilities and needs. From creating a web bowl under trees to lines of silk that act as prey-detectors, spiders are strategic when it comes to finding their next meal.

Generally, spiders create their webs to catch prey. No matter how you feel about spiders, it’s hard to deny the intricacy of their webs. Not only is the design of a spider web impressive, the strength is almost unfathomable. Spider silk is five times stronger than steel of the same diameter. It’s clear that spiders are experts when it comes to weaving their webs… but how do they decide where to spin it?

How do spiders make webs?

A spider’s first step to creating a web is called the “bridge thread.” The bridge thread is a long piece of sticky silk that dangles from one point. The silk will stick to another point by getting pulled by the breeze. Then, the spider creates a second thread by crossing the bridge thread. The weight of the spider pulls the second thread down, creating the center point of the web. This is when the spider begins to make a spiral by moving out from the inside. Finally, the spider creates its final spiral web—this time from the outside in—made of sticky silk and called the “capture web.”

How often do spiders spin a new web?

On average, it takes 30 to 60 minutes for a spider to weave a web. Even though spider webs are extremely strong, they don’t always last very long. They are constantly getting damaged by Mother Nature. Some spiders build new webs every day. Other spiders repair their damaged webs. Most spiders aren’t big on wasting their silk material. They often eat the damaged webs so they can recycle it into new webs later on.

Do all spiders weave the same kind of web?

Each spider family has its own type and set of spinnerets, which is an organ used to spin the webs. These are what determine what type of web spiders can build. For example:

How do spiders choose where to spin webs?

Trapdoor spiders live in burrows. They dig a space in the ground that is lined with silk. This is where they raise and protect their young. Their diet consists of a variety of insects and other arthropods. So, Trapdoor Spiders set up shop in vegetation where there will be plenty of bugs for them to eat. When their sensory silk line gets cut, the spider knows prey is nearby and will come out to ambush it.

Sheet-web Builders weave their webs on vegetation under trees. This is so they can catch insects that are on the ground or falling from the tree. These spiders connect a funnel-shaped burrow made of silk for their home.

Certain types of Space-web Spiders build a bowl out of tangled thread and attach it to the lower branches of a tree. This way, anything falling from that area of the tree will drop into the bowl for an easy meal.

Orb Weavers will create asymmetries with their silk depending on where their web is built. This is to ensure that each line is in the path of a flying insect. To calculate the best shape and structure, the spider uses light cues and their own gravity compass.

Why are there spider webs inside my building?

If you have spider webs in a building you own or manage, there’s a good chance you have other pests as well. Spiders are motivated by food, so spiders enter your space and decide to stay because you’ve got snacks for them. Here are 3 possible reasons why you have spiders:

Sure, spiders are a little creepy and aren’t always welcomed guests… but spiders aren’t all bad. When they eat, they’re ridding your building of pests that are more problematic than the spiders themselves. But, we get it… nobody wants a building infested with bugs. Get in touch with Assured Environments to solve your pest problems!