There are over 12,000 described species of ants, but while there are several thousand species, their anatomies do consist of the same general characteristics.

Larvae serve an important purpose in the ant colony: adult ants cannot eat solid foods, but larvae can process solids into liquids. When fed, the larvae will regurgitate its food into the “social stomach” so the adult ants can feed when necessary.

Ants are social insects with 3 distinct castes: workers, queens and males. Queens live the longest – anywhere from 1-30 years – and the colony will survive through her lifetime. The workers will generally live 1-3 years, while the males have the shortest lives, sometimes only a few weeks.

Most ants mate in swarms (with some exceptions). These swarms tend to happen during the warmer months of the year – between spring and fall – at which time winged males, followed by the winged reproductive females leave their colony’s nest and go out to mate. The females will follow a pheromone emitted by the male. 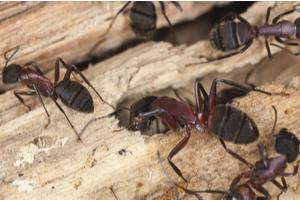 Characteristics: Tiny. Two nodes at waist with backward spines. Most fire ants are found in the south. The European Fire Ant is a hardier version found with greater frequency in New England. 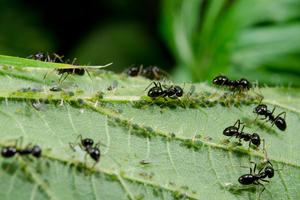 Size: varies but larger than non-winged ants. Up to 15mm 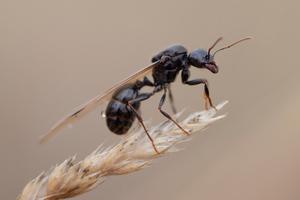 Characteristics: Flying ants are not a species of ant. All ant species produce fliers. They are the “alates” or queens and males whose sole purpose is reproduction. Often seen in mating swarms on warm humid days.

Signs of an Ant Infestation

The most common signs of an ant infestation is... seeing live ants. That aside, they also leave behind visible ant pathways and nests that look like small piles of soil, garbage, or dirt.

The best way to get rid of ants is to keep them from entering your building (or your office) in the first place. To do that, you should prevent ants from accessing the things that attract them. Throw away or store uneaten foods, repair dripping faucets or leaks, and re-seal around window and door frames.

If you find ants in your building, try to follow them back to their nest. Attempt to destroy the nest and the entire colony, including the queen. Most ant colonies form outside, even if the ants themselves travel inside for food and shelter.

If all else fails, contact the experts at Assured environments. We offer professional ant control in NYC and beyond. ‌